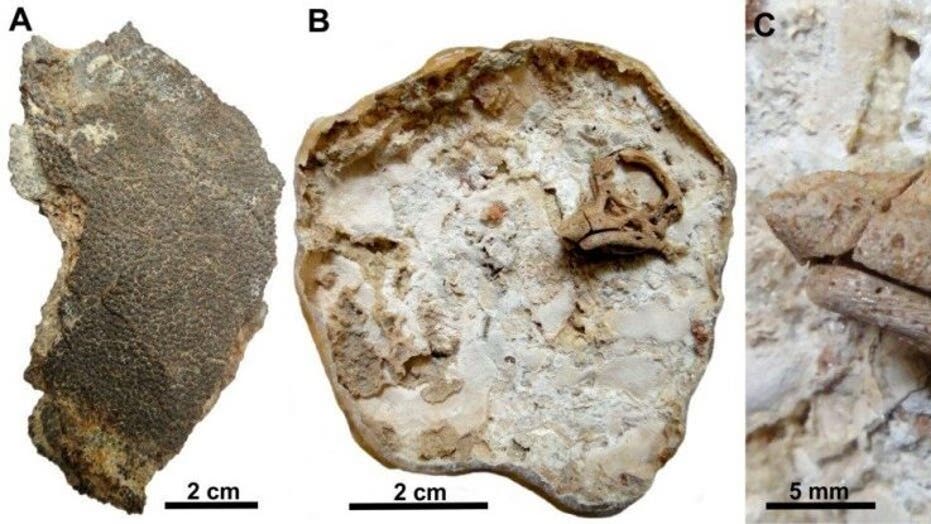 Researchers have discovered an "incredibly rare" embryo of a titanosaur that shows the long-necked herbivore had a "rhino-like horn" on its nose that was lost when it reached adulthood.

The fossilized skull of the 80-million-year-old previously unknown species of titanosaur shows the horn in remarkable detail. The skull is just 1.2-inches-long, but in addition to the horn, it shows the giant sauropod had "at least a partial binocular vision that would provide a much better visual perception," researchers wrote in the study.

“The preservation of embryonic dinosaurs preserved inside their eggs is extremely rare," study co-author Dr. John Nudds said in a statement. "Imagine the huge sauropods from 'Jurassic Park' and consider that the tiny skulls of their babies, still inside their eggs, are just a couple of centimeters long."

The findings were published in the scientific journal Current Biology.

After examining the "amazing specimen," researchers now suspect these giant dinosaurs, which reached up to nearly 40 feet in length and weighed 29,000 pounds, used the horns to break out of their eggs, akin to an "egg tooth."

“We were able to reconstruct the embryonic skull prior to hatching," Nudds added. "The embryos possessed a specialized craniofacial anatomy that precedes the post-natal transformation of the skull in adult sauropods. Part of the skull of these embryonic sauropods was extended into an elongated snout or horn, so that they possessed a peculiarly shaped face.”

Despite the incredible findings, the fossilized skull was almost lost to science, LiveScience reports. It was smuggled out of Argentina and sold in 2001 at an auction in Tucson, Ariz., to study co-author Terry Manning.

Manning thought about selling the embryo at another auction, according to a 2004 article in the scientific journal Nature, but he eventually repatriated the fossil to Argentina. From there, it was analyzed and now resides at the Carmen Funes Municipal Museum in Neuquen Province, in Patagonia, Argentina.

Titanosaur embryos are rare, but fossils of the enormous dinosaur have cropped up in recent years.

In 2015, a titanosaur was found in New Mexico. Fossils of another titanosaur were discovered in Argentina, also in 2015.

In 2017, the earliest known titanosaur on record, a 160-million-year-old behemoth, was discovered in Jurassic-era France. Separately in 2017, researchers decreed the 76-ton specimen known as Patagotitan, a member of the titanosaurs, was the largest ever dinosaur discovered.

In 2019, a new titanosaur with a "heart-shaped tail" was identified.

Get a daily look at what’s developing in science and technology throughout the world.