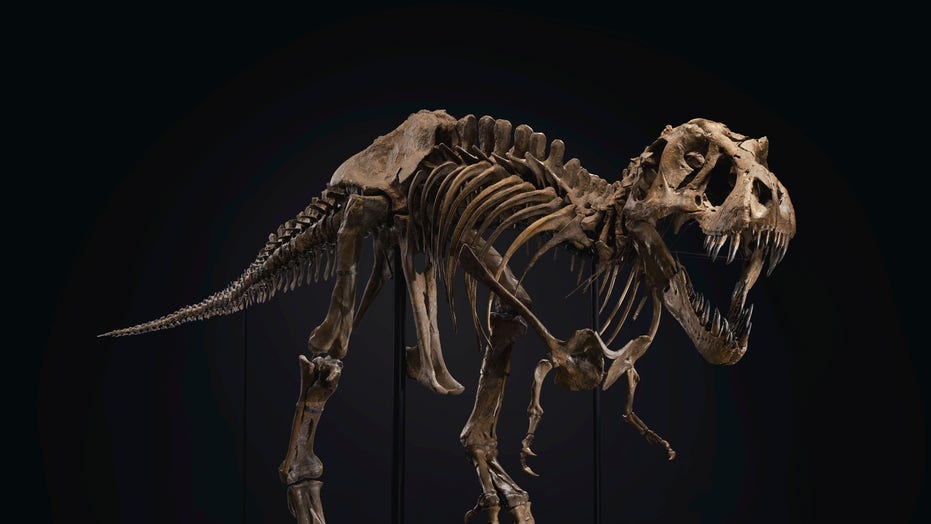 It's a sale 65 million years in the making.

A nearly complete skeleton of a Tyrannosaurus rex has sold at auction for a record-breaking $31.8 million.

Auction house Christie's, which handled the sale, said in a statement of "Stan," as the skeleton is known, the "impressive fossil skeleton stunned its virtual audience and smashed the previous world auction record." The $31.8 million price tag, which includes fees, is nearly four times the original estimate of $8 million.

Stan, named after the paleontologist Stan Sacrison who discovered the fossilized remains of the dinosaur in 1987, was described by James Hyslop, head of Christie鈥檚 Science & Natural History department, as "one of the best specimens ever discovered."

The skeleton, which stands 13 feet high and 40 feet long and is comprised of 188 bones, had been studied since its discovery. It was purchased by an unidentified buyer after a nearly 20-minute telephone bidding war, the New York Times reported.

It's believed that the holes in the ferocious T. rex's skull and neck vertebrate may have signified it was a ferocious warrior, surviving attacks from other Tyrannosaurs. Scientists also theorize that the dinosaur weighed nearly 8 tons, the Times added.

Although finding a dinosaur skeleton at auction is rare, it's not unheard of. In 1997, a T. rex skeleton known as Sue was sold at auction for a then-record $8.36 million.

In 2015, a 150-million-year-old complete skeleton of a dryosaurus, a 9-foot-long dinosaur from the Jurassic era, failed to sell at auction.

Researchers have learned a great deal about the anatomy of the Tyrannosaur in recent months.

In January, a new study confirmed the most fearsome dinosaur to ever walk the Earth underwent a massive growth spurt as a teenager, citing two fossils found in the early 20th century.

In September 2019, a study was published that suggested the terrifying dinosaur had a stiff skull that allowed it to not shatter its own bones with its bite force while simultaneously devouring its kill.

In addition to having a stiff skull, T. rex likely had something similar to an "air conditioner" in its head, allowing it to stay cool while hunting, according to a separate study.

In 2019, Victoria, the second most complete skeleton of a Tyrannosaurus rex after Sue, finally went on display after paleontologists first discovered the remains of the massive dinosaur six years prior.

Scotty, the world's largest T. rex, was discovered in Canada in 2019. Researchers estimated it to be 42 feet long and weighed 19,400 pounds.