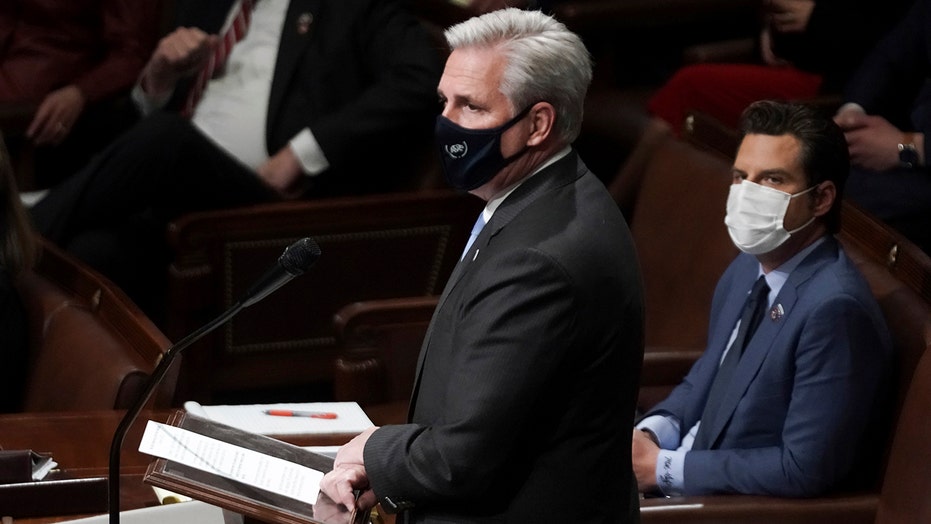 As the House debated impeachment proceedings against President Trump, the GOP leader weighed in: Impeachment would further divide, censure is more appropriate.

"I believe impeaching the president in such a short timeframe would be a mistake," House Minority Leader Rep. Kevin McCarthy, R-Calif., said on the House floor.

"No investigations have been completed. No hearings have been held. What’s more, the Senate has confirmed that no trial will begin until after President-elect Biden is sworn in," he explained.

The House is debating an impeachment resolution that charges Trump with inciting an insurrection during last Wednesday's Capitol riots.

He said that impeachment would further divide the nation and "fan the flames of partisan division."

TRUMP ACKNOWLEDGED THAT HE BEARS SOME OF THE BLAME IN CAPITOL RIOT IN CONVERSATION WITH MCCARTHY: SOURCES

"That doesn’t mean the president is free from fault," McCarthy continued. "The president bears responsibility for Wednesday’s attack on Congress by mob rioters. He should have immediately denounced the mob when he saw what was unfolding.

The California lawmaker called on Trump to immediately accept his share of responsibility and ensure President-elect Biden is able to begin his term successfully.

Still, he said the president’s response to last week’s Capitol riots called for congressional action, "which is why I think a fact-finding commission and a censure resolution would be prudent," McCarthy said.

Censure is a formal reprimand or statement of disapproval. The House has three formal modes of discipline: reprimand, censure and expulsion.

A source told Fox News on Monday that Trump told McCarthy that he bears some of the blame for the Capitol riot last week during a conversation with the House GOP leader.

"I don’t believe it will be whipped," one senior Republican aide said.

Meanwhile, on the other side of the Capitol, sources said Senate Majority Leader Mitch McConnell, R-Ky., is furious with the president, and said he is "done with Trump."

The source told Fox News that McConnell believes that impeachment will help rid the Republican Party of Trump and his movement.

McConnell, R-Ky., issued a memo to Republican senators earlier this week saying that the Senate would not be able to reconvene for business until Jan. 19 without the consent of all 100 senators. This would mean, in effect, that the earliest an impeachment trial for Trump could begin is 1 p.m. on Jan. 20, an hour after President-elect Biden is inaugurated. It's almost certain a Trump loyalist senator would object to bringing the Senate back early.