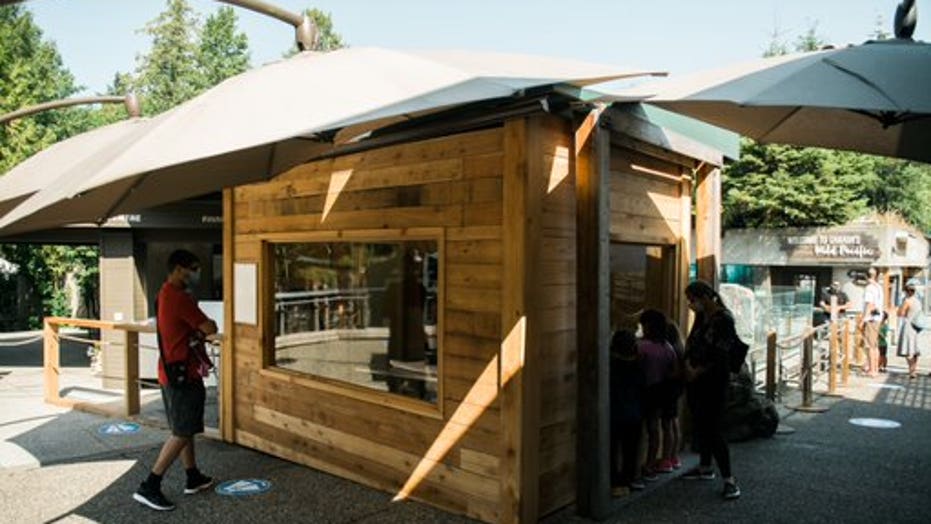 As of this week, he weighs about 20 pounds.

And as of this moment, he is playing around in a tub of ice cubes, aka otter catnip.

Joey is an orphan. In July, he was discovered alone and crying off the coast of Kyuquot. His mother was found floating, dead, a day later.

He was taken to the Vancouver Aquarium's off-site Ocean Wise Marine Mammal Rescue Center, where he currently resides.

But, something unexpected happened amid the backdrop of the COVID-19 pandemic: Joey has become a YouTube livestream sensation.

Now, the small otter pup has thousands of devoted viewers from across the globe watching his daily routines from the many cameras installed in the facility, and commenting in an active Live Chat.

Joey gets combed and dried by his caretakers. Grooming is an important part of his daily ritual. (Credit: Vancouver Aquarium/Ocean Wise)

The rescue center also posts daily videos to their YouTube page for those who want to see the best highlights, like the classic "Joey and the Evil Towel" – a video with more than 52,000 hits – and 509,000-view "Wiggle, wiggle, JUMP!" where Joey tries to make a run for it while working with veterinarian technician Sion Cahoon.

Cahoon had worked at a small animal practice with dogs and cats for 13 years before becoming involved in the program. On the day she spoke with Fox News, she had just done an off-site sea lion disentanglement and taken a penguin to get a CT scan.

Cahoon spoke with Fox News while working with Joey on FaceTime earlier this month. She recalled the day she was contacted about Joey and the moment she laid eyes on her new furry friend. He was flying in on a seaplane near the Vancouver Airport. At that point, he weighed just around 3.5 pounds.

First and foremost, Cahoon was worried about his temperature. Otters have no blubber to regulate heat and rely on their soft, dense fur for insulation. Otters have approximately 1 million hair follicles per square inch of their fur.

She was also concerned about his blood glucose levels because otters can become hypoglycemic very quickly.

"So, that's why we have to feed them so often — to keep up that metabolism and keep the blood glucose up," Cahoon explained.

Joey has a staff member and a volunteer present 24 hours a day. His activities involve getting groomed, playing with his many toys, eating a clam-laced formula roughly every two hours, diving into ice buckets, swimming around his turtle kiddie pool affectionately named "Sheldon," and more recently swimming and diving.

He's curious, he's highly intelligent, and Cahoon noted that he's "demanding." He cried loudly throughout most of the interview with Fox News.

According to California's Monterey Bay Aquarium – which has its own rescue program – it takes about $16,000 per year to raise one otter.

Joey will eventually need to become independent and move in with the other otters at the center — some of whom he's already met, though apprehensively.

Raising wild animals – especially rescues – can be a daunting and expensive pursuit. Unfortunately, the Vancouver Aquarium has closed indefinitely.

Cahoon explained health restrictions did not allow for the aquarium to have enough staff on site to raise money like they normally do and many of her co-workers have since been laid off.

"So, it's been it's been a really hard time and really sad times around here," she admitted. "You know, [there are] some people [who] had been here for a really, really long time and absolutely loved working at the aquarium and we had to say goodbye to them. And... obviously, it's not anything that you ever want to see happen in your lifetime, but COVID has brought that to a lot of people. So, we're just kind of dealing with it as best we can."

There are currently around 75 staff members on-site taking care of more than 70,000 animals, including fish, birds, reptiles and amphibians, monkeys, and marine mammals.

With that many to care for and no paying visitors, the Aquarium is largely relying on donations to keep them going.

The Vancouver Aquarium hopes that donations will keep them, and otters like Joey, afloat.

Ocean Wise's director of communications, Amber Sessions, told Fox News that they have received donations from "more than 30 countries including Finland, Philippines, Japan and Slovakia." The donations pop up in a ticker on Joey's stream.

Joey's popularity has had an interesting effect on his supporters and adoptive "parents."

One U.K. psychology student – who wanted to remain partially anonymous – was so inspired by Joey after watching his jellyfish toy video that she petitioned Ocean Wise to study the impact Joey has had on the mental health of those who watch him frequently.

The student, who goes by Georgina T., found that watching his videos made her happy and relieved some of her stress. She also uncovered that others shared those feelings and it piqued her interest.

She is working on a survey to study the positive impact young Joey has had on viewers across the globe and whether or not their understanding of sea otters and marine mammal conservation had changed since watching him. So far, she's received almost 500 responses.

"Psychiatrists are really interested in therapy, and I got really interested in [the] analysis of therapy: particularly canine-assisted therapy," she told Fox News. "So, I actually was really excited by the idea that [...] a sea otter could do a similar sort of thing potentially and be bringing positive benefits to people. I thought that was really cool."

A recent report shared in the New York Post detailed a collaborative survey by the University of Leeds and Tourism Western Australia that concluded watching videos of cute animals can significantly reduce feelings of stress and anxiety.

Nineteen participants watched videos of Western Australia’s quokkas – a famously adorable marsupial – for 30 minutes. The individuals had their blood pressure and heart rates taken before and after watching the animal clips, and researchers found both fell significantly in the course of watching the video footage. 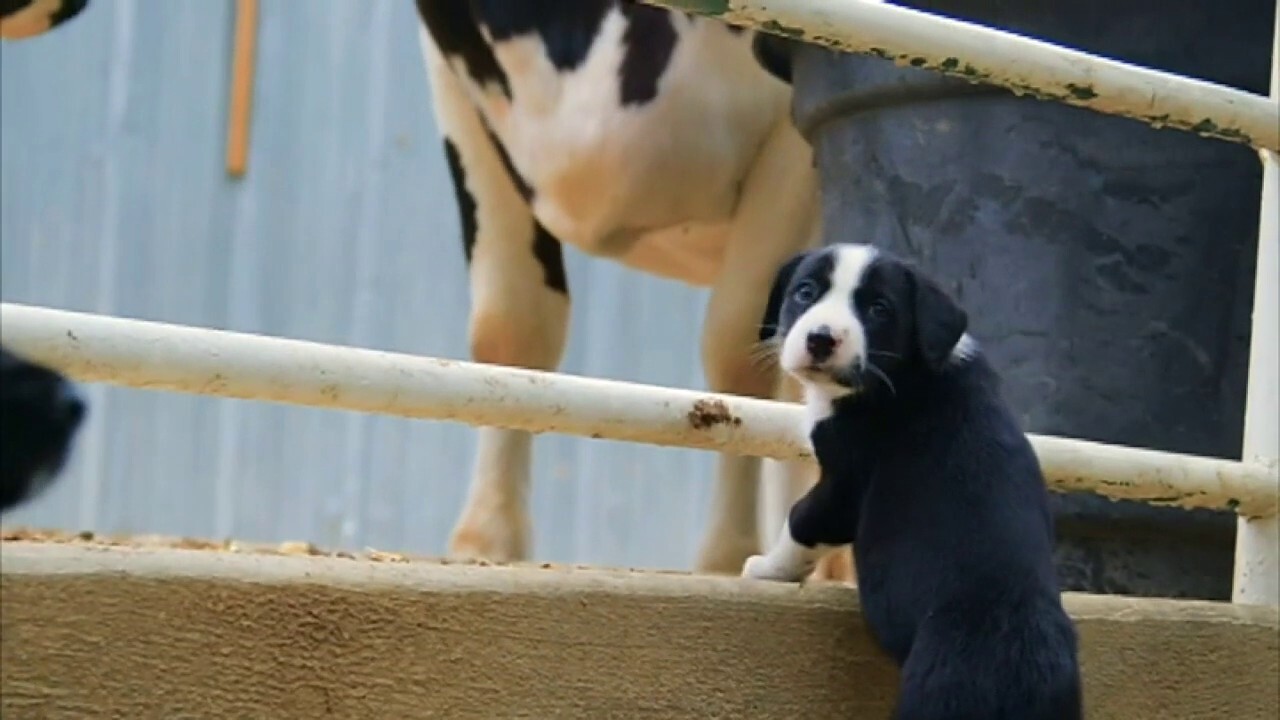 Additionally, a clinical psychological analysis found that anxiety levels were reduced on average by 35%, and in some cases by nearly half, the Daily Mail reported.

Georgina said she thought people were drawn to Joey as a method of escapism from reality. She, herself, keeps Joey on her computer screen at all times.

"And, it's clear that Joey has been helping literally hundreds of people," Georgina said.

While there is not yet a conclusive tally of just how much money raised or how many peoples' spirits Joey has lifted, Cahoon promised that Joey's team would try to keep the stream going as long as possible.

She, too, noted the "community" Joey had gathered.

"It's [...] really touching and heartwarming to see a little creature like this bring together so many people from so many different places," Cahoon said. "And, I'm kind of getting goosebumps just talking about it. But... especially during these difficult times where... everybody hops online and can somehow bond and feel close to other people through this crazy little creature who just screams... I just think that's so awesome and I love it."

"I'm so happy that he's able to bring happiness to so many different people," she added. "So, it's really cool."

To learn more about the Vancouver Aquarium, supporters can go to vanaqua.org. To symbolically adopt Joey or another rescue patient at the Marine Mammal Rescue Centre, those interested can visit mmrpatients.org.

Julia Musto is a reporter for Fox News Digital. You can find her on Twitter at @JuliaElenaMusto.